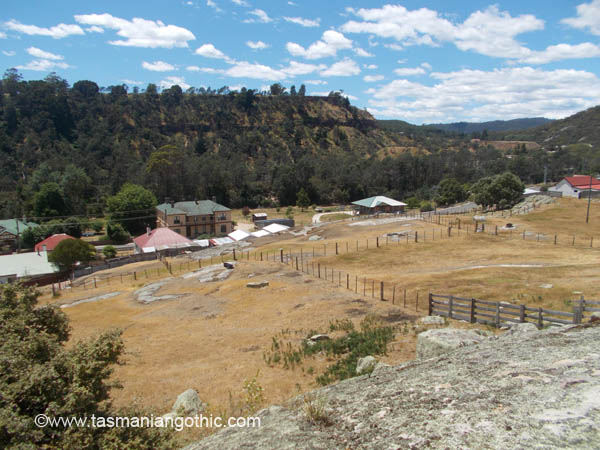 This is Derby, in north eastern Tasmania, scene of one of the state’s worst natural disasters.

In 1929 unprecedented heavy rains flooded Launceston, leaving 4,500 people homeless. Roads and railway lines to Hobart were cut; a landslide on the Mount Lyell Railway left Queenstown isolated. Earthworks for a new railway on the east coast were completely obliterated. The Pioneer tin mine was flooded; the dam at the Monarch tin mine was severely damaged, and the dam at the Briseis tin mine burst, releasing a wall of water thirty metres high that tore through the town of Derby.

The dam on the Cascade River about three kilometres from the town provided water for high-pressure jets used to remove overburden from the ore at the mine. 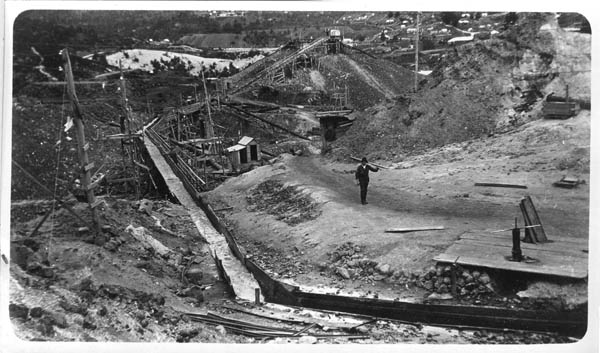 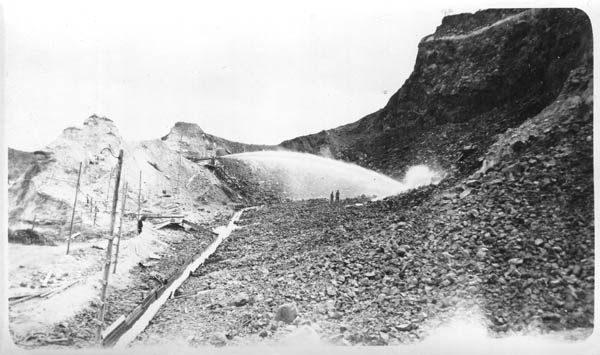 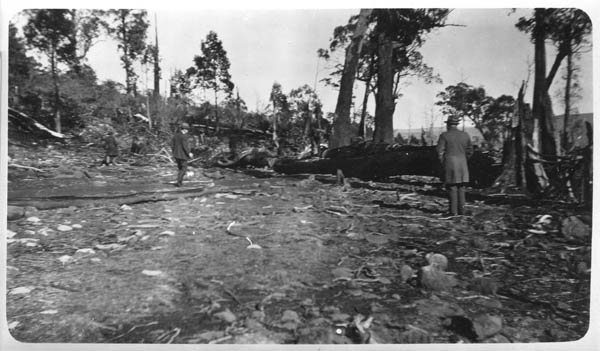 My grandfather was one of the Forestry Department officials sent to inspect the damage. Here are their photographs, with the notes written to accompany them.

1. This was a big Lake
The area submerged by Briseis Dam before it carried away. Water level can be easily seen by the whitish lower portion of dead timber. The rush of released waters truly cleaned up the bed of dam. This shows the old bed of Cascade River. 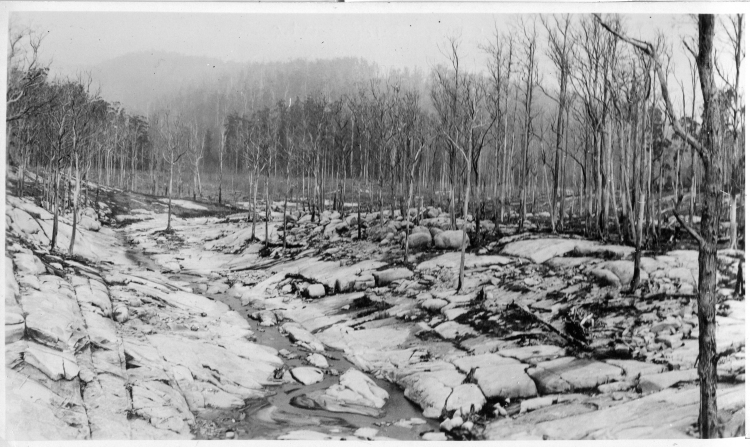 2. All that is left of the Briseis Dam on the  extreme left. 70 odd feet depth of water carried everything before it, leaving only solid bed-rock behind.
An idea of the height of Dam can be gauged by continuing the remains of the parapet across the photo. [nb. somebody has ruled a faint pencil line across this photograph at the appropriate angle] 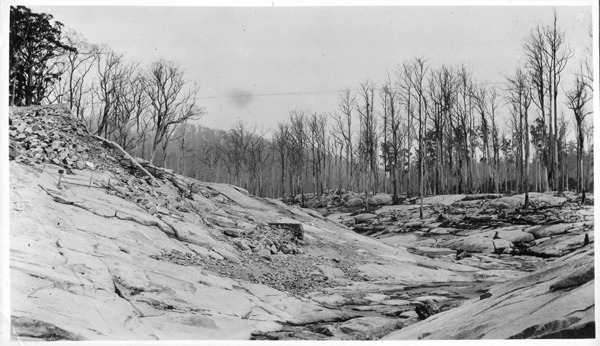 3. The Western end of Briseis Dam showing how clean was the break. The country behind was of course submerged to make the dam. 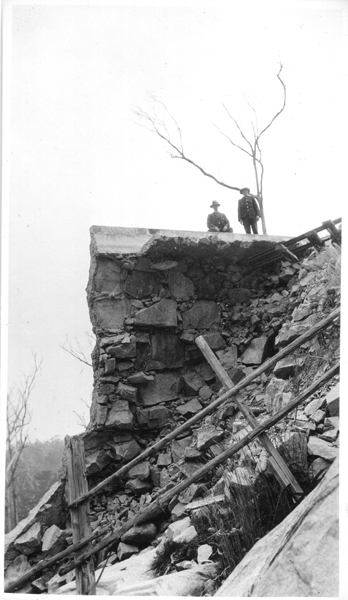 4. The track of the flood, taken looking down from dam site.
Prior to this only a thin trickle of water ran down this valley which was thickly scrubbed and timbered right to the bottom. 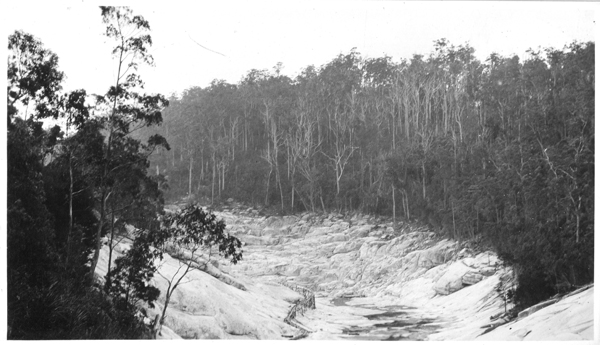 5. Showing the power of the pent-up waters. About 400 yds below dam.
The fluming on the right came right round to where photo was taken and was swept away by the flood.
Not a vestige of soil, foliage or rock (except solid bed-rock) is left for a depth of quite 100 ft. 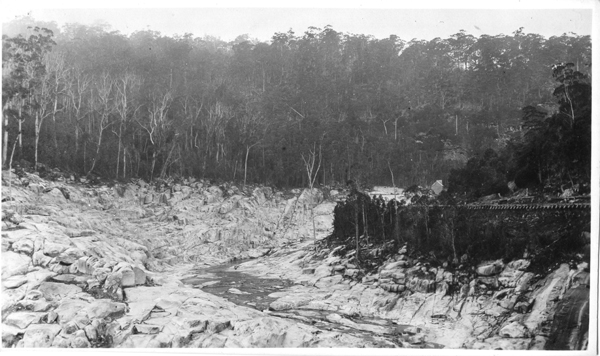 6. The break through of the Briseis Dam waters just above Derby. The flood tore its way through the hill making the gap on the left.
The height of the released waters can be gauged by the appearance of the torn hillside on the extreme right.
It was on the plateau in the centre that several homes were swept away and one whole family of 5 perished. 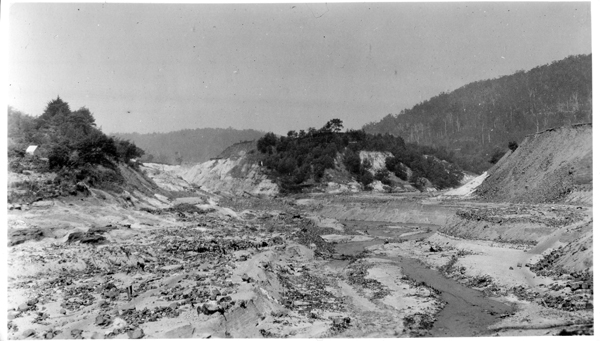 7. Alberton – debris brought down by the flood. 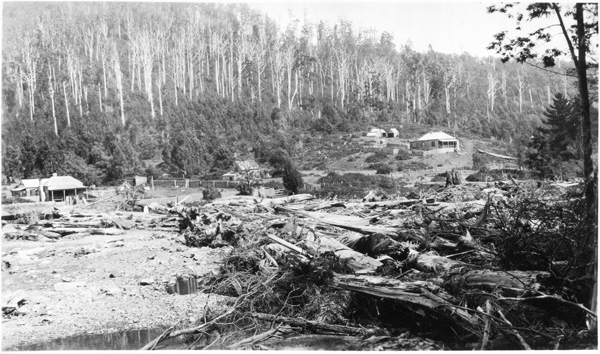 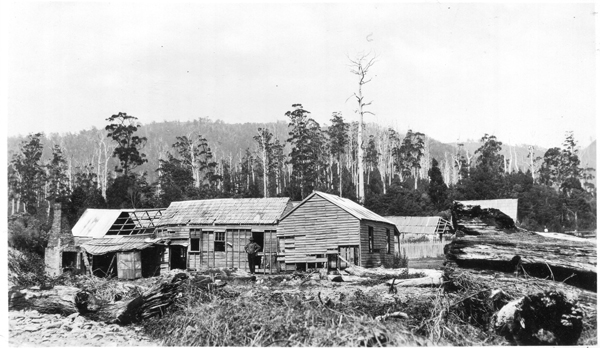 9. A beautiful piece of Beech Forest, near Britannia Ck along Cascade River valley.
This is on the edge of the burnt and denuded country and only needs another fire to sweep it beyond recall. 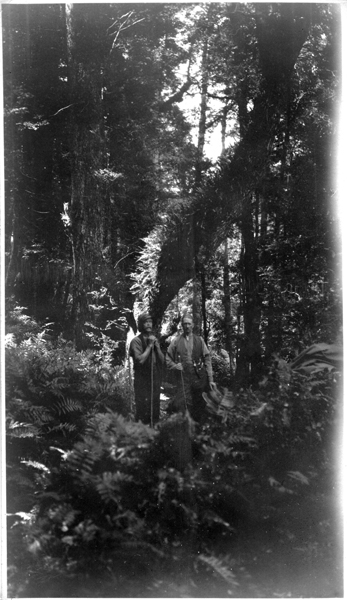 10. The edge of desolation. Cascade River valley. Utterly denuded catchment area in distance. Nature trying to re-habilitate dead country-side. Providing fires are kept out success in this part is assured. 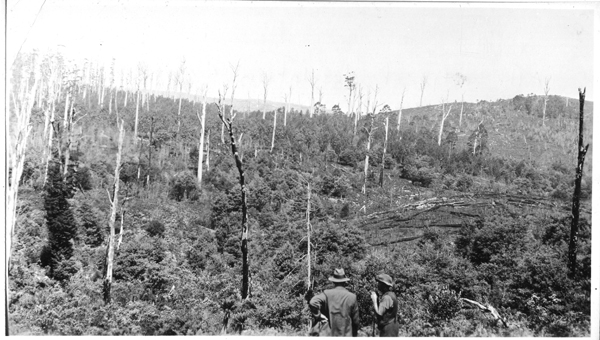 11. Bell’s Hill
Fire after fire has denuded these hills, part of catchment area of Cascade River. Bracken fern is the only green thing that can live, the soil even having disappeared in many parts, leaving only rocks and rubbish. 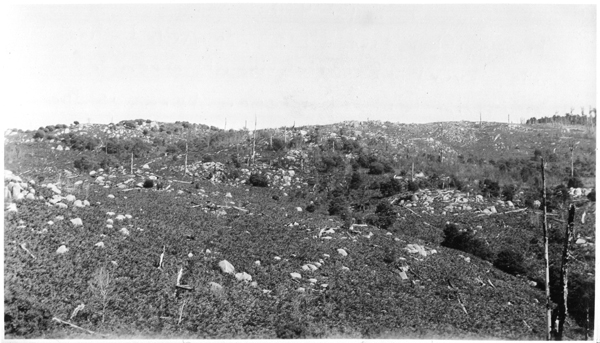 12. Bell’s Hill
If the fires had not swept these hills, Derby would have had a chance. 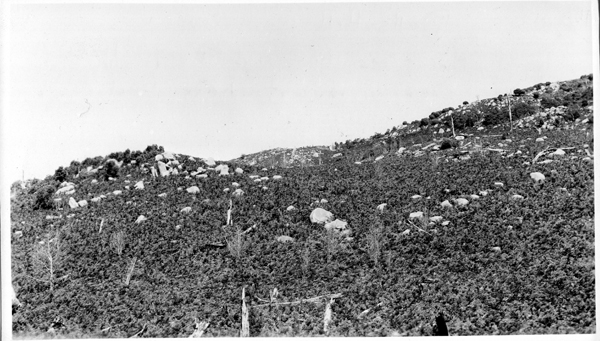 13. Desolation
Is it any wonder that the Briseis Dam was unable to stand the rush of water pouring down the Cascade River from these burnt and denuded hills?
Part of catchment area and headwaters of Britannia and Main Creeks and Cascade River. 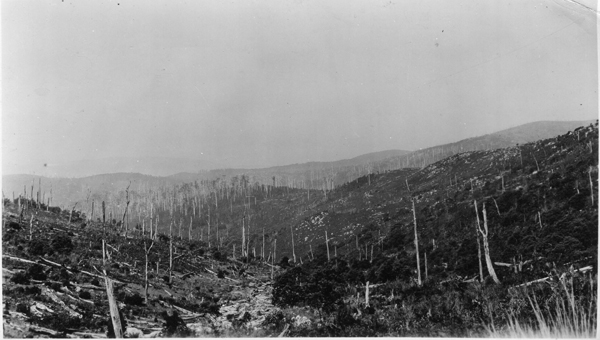 14. Backburning on Forester Rd to prevent the spread of an advancing fire.
A bit out of focus. The Chief is the figure.
Indiscriminate burning-off undoubtedly caused the disaster of the Briseis Dam burst. 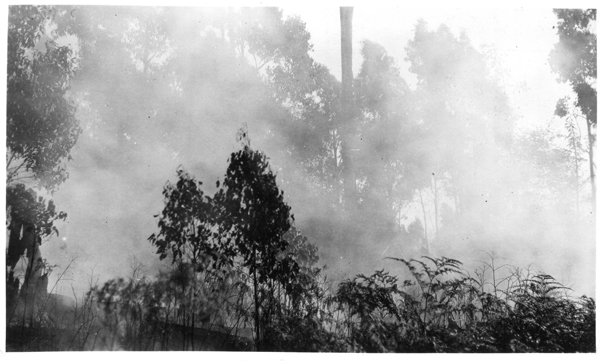 Fourteen people drowned in the flood. There was, of course, an inquest.

The jury, after an absence of 35 minutes, returned the following verdict:

That the deaths were caused through drowning in a rush of water down the Cascade River and over the Briseis mine workings following the bursting of the Briseis Company’s dam; and that the bursting of the dam was the result of an abnormal and unprecedented volume of water, which might have been caused by a cloudburst, or by an extraordinary rainfall in the catchment. No blame was attachable to any one.