The first of three pages, this one outlines Col D.A. Lane’s life  up to the withdrawal of Australian troops from the Gallipoli Peninsula in 1915. Page two covers the remainder of WW1, his marriage and return to Tasmania, and the third, yet to come, will continue his busy life as Forestry officer, Boy Scout Commissioner and part-time soldier in Tasmania.

Denis Arthur Lane was born in Christchurch, New Zealand on 3 November 1886, the seventh child of Benjamin and Fanny (nee Barsham) Lane. His father was a journalist and illustrator who came to New Zealand from Great Yarmouth, England, in 1867 at the age of nineteen. Fanny Barsham was born in Melbourne and came to Christchurch with her parents when her father, a trooper on the Ballarat goldfields, was recruited by the New Zealand police force.

The Lanes moved to Sydney in 1890, where Ben was employed by the Illustrated Sydney News before being invited to Hobart to take charge of the new Process Department at The Mercury. By this time his oldest daughter, Bess, was working as a schoolteacher and the next daughter, Ada, had been cooking for the family from the time she was tall enough to reach the stove – which remained her occupation for the next seventy years. Alf, the first son, became a civil engineer, Norm followed his father into The Mercury for a brief career as a printer before taking up farming, Albert joined the Public Service, Dorothy remained at home writing for the Bulletin and other periodicals and Denis joined the legal firm of Butler, Macintyre and Butler. 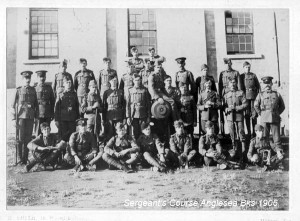 In 1906 Denis joined the Derwent Regiment, and in 1907 passed his first exam for a commission. In a disappointingly abbreviated CV he wrote many years later, he describes himself as “a C.F. member of A.I.C.”i in 1908, but the official posting was not until the following year. He originally applied to join the Artillery, but I suspect his real interest was in surveying and map-making, for when he gained his promotion to Lieutenant in July 1909 he joined the newly-formed Intelligence Corps  that had taken over these tasks. Denis was employed in Intelligence duties until December 1910. 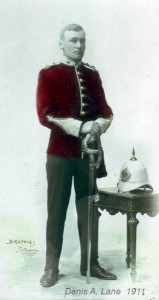 Evidently the Army attracted him more than Law, for on his promotion to Captain in 1911 he became the temporary Area Officer at Beaconsfield, a full-time position, and in 1912 was appointed Adjutant of 12th A.I.R.ii in Launceston. A field note-book and diary from this time contain operations orders for exercises, sketch maps, equipment lists and random notes. “The Governor General inspected the Cadets here last Saturday and said that No.1 Company marched the best. No.1 Company was formed from my cadets, so I am naturally pleased. I might state that their marching is usually absolutely rotten.”iii and at the end of the year: “thus ends another year of hard slogging and harder swearing. May the Devil be kind to the Brigade Major and all Area Officers for the coming year.”iv 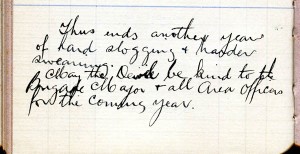 TO GALLIPOLI WITH THE 12th 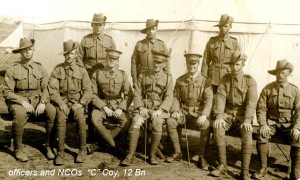 Captain Lane joined the A.I.F. as Commander, “C” Company, 12 Battalion, 3 Brigade  on 28 August, 1914. The 12th sailed on 20 October 1914 on the troopship Geelong, the first to sail directly from Hobart, joining a convoy for Egypt at Albany on the 28th. They arrived at Mena Camp, beside the Pyramids, on 19 December 1914 where training resumed in the desert – “marching on the sand. It is hard going and if a wind is blowing, it is most horrible . . . The general impression here is that the Australian Division is a magnificent body of men. Their physique certainly shews up as compared to the Territorials. Nevertheless, the ‘Terriers’ are not wanting in spirit, and more than hold their own . . . There will be some of the most bloodiest work recorded in history done in the coming Spring. I trust that it will be speedy and thorough, as it is becoming a most horrible and ghastly business.”v

Early in 1915 the Battalion was expanded to eight companies, with the arrival of two companies from Perth, and re-organised into four double companies. D.A. Lane went to Battalion HQ as Quartermaster, and his notebooks are now stores lists, ammunition issues, and lists of officers returning swords.

The Devanha, carrying the 12th Bn, was the first ship to arrive at Mudros on Lemnos, base for the Gallipoli campaign. 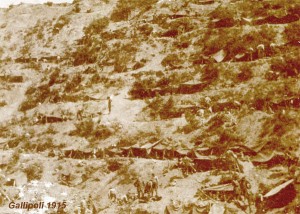 The 12th landed on the Gallipoli Peninsula about 4.30am on 25 April 1915, HQ and “A” Company almost on the extreme north of the Divisional front, at the foot of Russell’s Top in a portion of the beach under direct machine-gun fire. By mid-afternoon Capt D.A. Lane had taken command of “D” Company on the death of its commander, Capt Lalor (grandson of Peter Lalor). The following day Denis’ promotion to Major was gazetted. 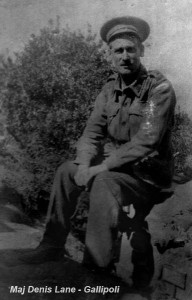 Major Lane “stuck to his work right through not having left the Peninsula since he landed while some have come and gone as many as three times”vi “After the turmoil . . . of the first few days . . . the Battalion settled gradually down to ‘trench warfare’ a form of warfare not taught in the training manual and quite foreign to the half-company skirmishes practised at Pontville or the brigade exercises against Tiger’s Tooth and the shivering night outposts in White House Valley . . . The 3rd Bde occupied the right of the line at Anzac, overlooking Gaba Tepe, facing south, and facing east confronted by Gun Ridge held by the Turks.”ix

The 12th Bn was detailed as part of the Divisional Reserve for the attack on Lone Pine; “D” Company, under Major Lane, went into action about 9 pm on the 6th August, by which time the battlefield was in total chaos. They were withdrawn late on the 8th. During this operation the Battalion Observation Post was in charge of Lance Corporal Norman Lane, Denis’s older brother. A third brother, Fred, was training reinforcements at Zeitoun Camp in Egypt and fretting at being so far away from the action.

The Third Brigade was withdrawn from the Peninsula in November and spent Christmas at Lemnos before moving to Serapeum to become part of the Canal Defence Force. 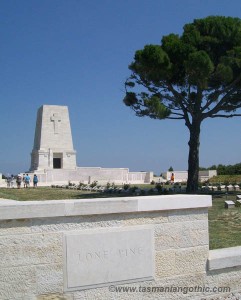 vii D.A. Lane – The Story of the Twelfth, Chaps VI and VII were written by Lt Col Lane, Lt Newton having been absent from the Peninsula during this period.